Henrik Ostergaard, lead singer for Pennsylvania-based rockers Dirty Looks, passed away Thursday morning January 27th, 2011 at 9:18 AM. He was 47. Erie County Coroner Lyle Cook said Ostergaard died of natural causes while under hospice care. «I’m deeply saddened by the news of Henrik’s passing,» said Jack Pyers, who played bass on numerous Dirty Looks’ albums. «I consider myself lucky to have had the opportunity to work with and share some significant achievements with Henrik. He is and will certainly always be in my thoughts and close to my heart. So, my deepest respect to Henrik as a friend, father, husband and one of the best rock’n’roll singers that ever was.» Dirty Looks emerged in 1984 like a high-energy, long-haired American equivalent of AC/DC, playing ferocious, hook-heavy songs. «Oh, Ruby», from their second independent album, earned widespread airplay on rock stations and led to the band signing with Atlantic Records.

Henrik Ostergaard was the lead singer for ‘80s metal band, Dirty Looks. Formed in San Francisco, California by way of Pittsburgh, Pennsylvania in 1984, Dirty Looks released a handful of albums before Atlantic Records took notice and signed them. Their major label debut, Cool From The Wire included «Oh, Ruby,» whose video received enough MTV airplay to help the album make the Billboard album charts. After the band broke up in 1993, Ostergaard formed Rumbledog. He took a break from the music business during the late ‘90s, but then reunited with Dirty Looks in recent years. On January 27, 2011 goerie.com reported that Henrik Ostergaard died earlier that day of natural causes while he was in hospice care. He was 47. 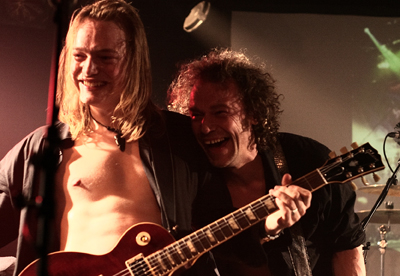 We deeply regret the suddenly passing away from our dearly beloved band member and personal friend JAN SOMERS. Jan died of a heart-attack this afternoon at the 28th of January, in the age of 46, at his home in Mierlo, Holland. Jan was one of the band members of the first hour from the band Vengeance. We wish his family, friends and fans the strength to rock on. The family’s request is to give them peace and quietness for the next two days.
Jan you have painted your Soul Collector and man he’s going to love you like we are already missing you... Lots, Lots and lots of love your Rock and Roll band.
Collapse