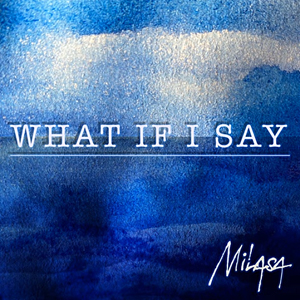 Russian-born songstress Milasa became famous all over Europe due to her unique humble melodic approach to acoustic guitar-driven atmospheric songs, reminded early and a little bit naïve days of Joni Mitchell. Nevertheless, Milasa’s songs still keep a strong mark of 21st-century musicianship due to extensive use of New Age’s elements in her song cycles. But after some live shows with various instrumental combos and even chamber orchestras as well as an atmospheric metal arrangement of 2019 single “Angel”, it’s time to step ahead. Ahead, in the direction of what you may call lyrical symphonic rock, to be precise. Such a step is made with her newest digital single “What If I Say”, available May 22nd, 2020 on Spotify, iTunes, Google Play and all other major platforms. New track is produced by music producer / sound engineer Slava “Slavic” Selin.

All Milasa’s trademarks are here – big dramatic melodies, atmospheric quality of the song itself and immaculate vocal delivery. But there’s full band arrangement that made “What If I Say” very different to Milasa’s songs’ back catalogue. And the term “different” may also go to Milasa’s voice now: this is the voice in full flight, which owned a well-controlled passion at the same time. Music, arrangement and delivery of “What If I Say” very well suited unusual choice of lyrics – it’s mysterious poetry of Emily Dickinson (1830–1886), which inspired singer-songwriter after the first reading. A piece of outstanding modern music in its full glory, no less.

“What If I Say” on Google Play:
https://bit.ly/What-If-I-Say-Google

“What If I Say” on iTunes:
https://bit.ly/Milasa-What-If-I-Say-iTunes

“What If I Say” on Spotify:
https://bit.ly/What-If-I-Say-Spotify
Collapse